Design development for the 6-month campaign began with this single-page ad, using hexagonal shapes and specific colors to differentiate the award categories. The ad appeared weekly in full or half-page versions, replaced with a Save the Date ad once the nominating deadline had passed and the event approached. 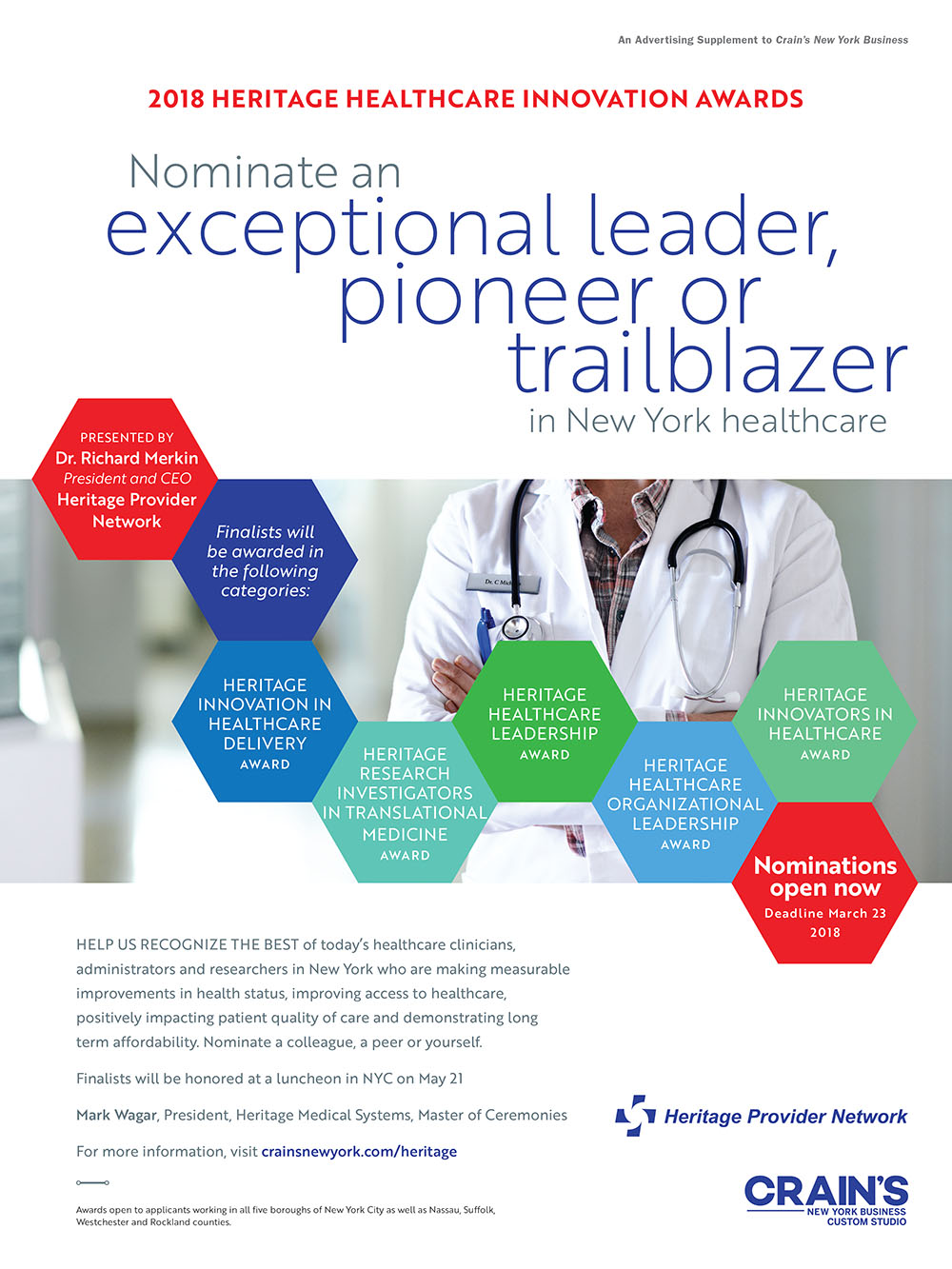 Multichannel promotion began with social media and Run of Site assets in multiple sizes, video splash screens and title bars, a landing page on the Crain’s website, and the nomination email. During the course of the campaign over 80 assets were created, only a few of which can be shown here.

The theme continued with an email invitation sent to judges, before they were announced with a page in Crain’s NY Business, and online via press releases and social media.

One-third cover wrap and back cover, along with 4-page insert to promote the awards. In addition to appearing in the regular edition, the wrap was individually customized for 80-plus recipients.

26 finalists were introduced in a spread in Crain’s NY Business, and an ad in the New York Times, while digital assets continued to drive traffic via the website and social media. 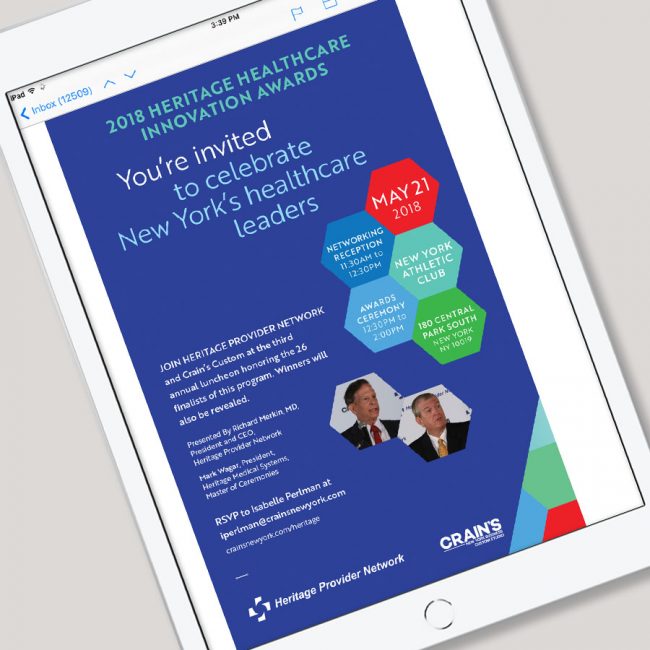 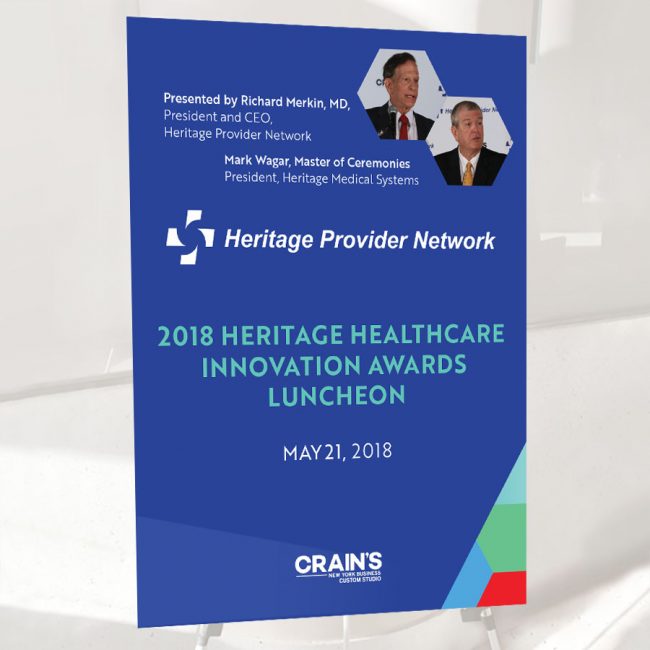 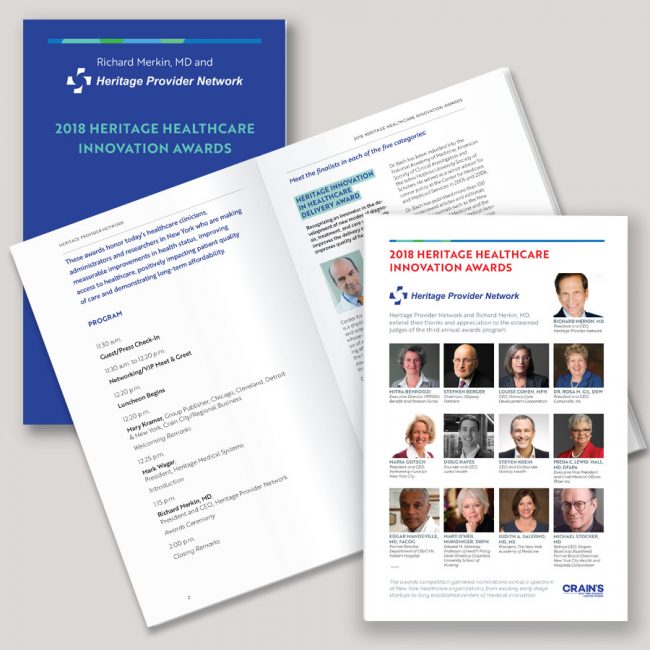 The winners were celebrated with an 8-page section in Crain’s NY Business. It was designed in advance, with placeholders for event photos, and released for printing just two days after the event.

Ad in Modern Healthcare, and digital assets for social media and Run of Site to drive traffic to online event wrapup. 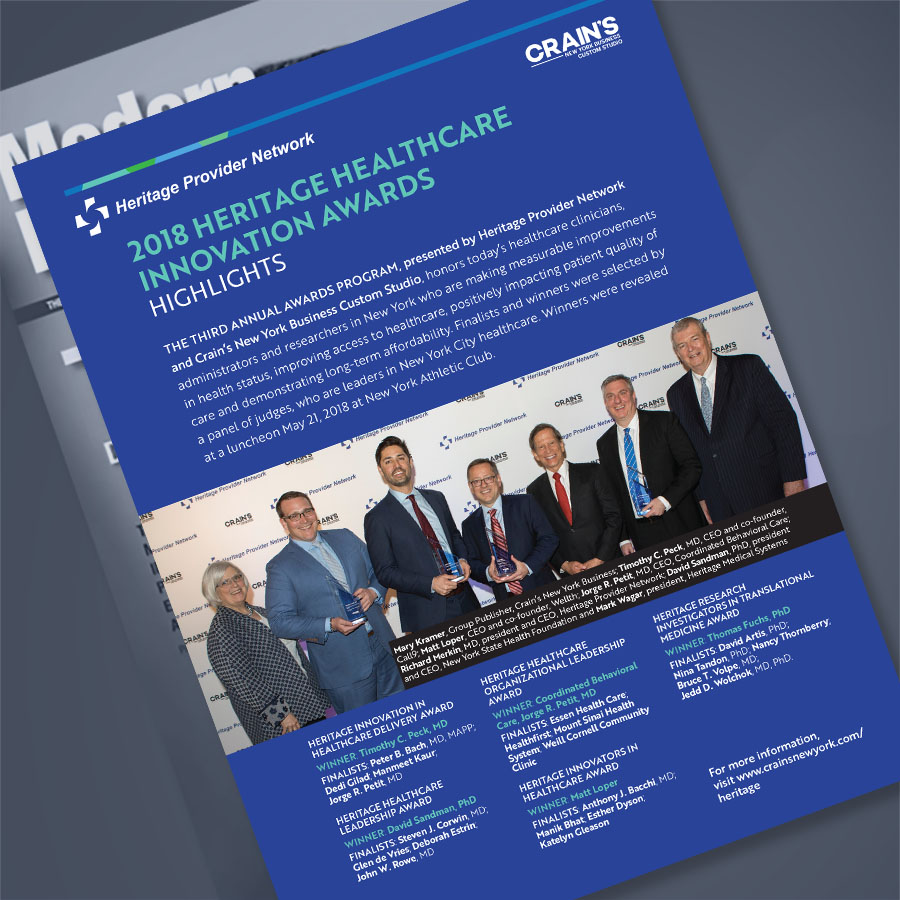 The hexagons were the main visual element, and were used to house text, images, or flat color. There were also times when the hexagons would not fit, but I was able to use them subtly by including a cropped version of them within the 7pt horizontal blue bars used in some of the print layouts.

The doctor image on the ad was flopped, so it would work better with the hexagons, but that meant the name tag was now reversed. To correct that, I had to remove the lettering from the tag, type it on a new layer, rasterize it and distort it to lean backwards to match the angle of the tag… and cut away where it ran over the stethoscope.

The Heritage Healthcare Innovation Awards recognizes the best of the year’s healthcare clinicians, administrators, entrepreneurs, scientists and researchers in New York. The program honors those who are making measurable and scalable improvements in health status, improving access to healthcare, positively impacting patient quality of care and demonstrating long-term affordability.

If you would like to learn more about the Heritage Provider Network please visit their site.